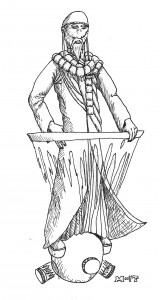 We all have laughs around the game table but it’s usually from players making comments or suggesting ridiculous plans or . . . okay there are a lot of reasons we laugh but what about laughing because the game was funny?

I haven’t played a game like that in a while, we’ve been doing gritty and realistic. I tried doing funny as a player in one game but the GM was new and didn’t know how to react so it just confused him. It’s much easer to set the tone for humor when you’re the GM.

We used to play a space opera game that I started writing when I was in my early teens (some 23ish years ago!). We played serious some times and funny other times. We had been listening to the Hitchhiker’s Guide radio plays and so our games were full of computers that had weird personalities and really bizzare aliens with even weirder ideas of how to get by in life. The odd thing is that we would slip from one serious to humorous with the same characters and we didn’t think anything of it.

It was mostly absurdist humor that we practiced and I think that large universe Sci-Fi is a great place for that because there are plenty of places that you can throw in something ridiculous and how do you know that aliens don’t really think like that? There a suspension of disbelief because you can’t truly cry foul. We had zany moments in a few other games but they were rarer.

Those were great games, not much happened in them but no one really cared because just getting the airlock open was gut bustingly funny. So how can you have a humorous game for yourself?

The first thing you need to do is know your players. What kind of comedy do they like?

Are the players ready for this? Don’t make my mistake and try to drop a funny game on serious players.

Start small have one wacky computer or servant and get a running gag going. Don’t have them be a pain, make them indispensable but to get the benefit from them the players have to put up with some zany antics.

Now, once the joke is well established, let it start to spread. Make more unusual characters start popping up. Once one character is established and the players are getting a laugh out of them, they’ll roll their eyes and say “Oh no! Another one?” but they’ll go with it because they know where the goofiness is going.

For a long time, do not have the humor harm the players in any way. You may never have it harm the players directly but at least don’t slow down the PCs with it until there have been several sessions where the humor is now an accepted part of the game. Even then if you decide to cause the PCs problems start small with just minor frustrations.

So that’s the plan, what do you think? Do you dare to open this can o’ worms? Let us know in the comments.

2 Responses to Adding Humor, On Purpose