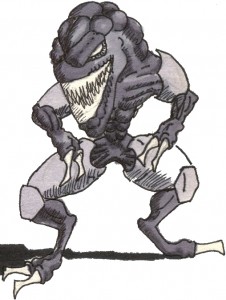 They go by many names. The Scimrahn call them Brouragh. Most of the Kelrath call them “Hevoph Yjechk” (translated “Coward’s Knife”) but some Gijorn and Rantaa’ have referred to them as “Bodakoj Thimol” (translated “Dead Stealers”). Earthers call them “Hounds” but none of these are their real name. The Chezbah call them the Lesser Seed.

The Chezbah deploy the Lesser Seed in a number of roles. They make up the majority of their ground forces and are used to mass against the Kelrath in battle. They are also used as sentinels to guard and patrol because of their data uplinks. As soon as one sees something all the Lesser Seed know about it and any nearby priest or Warriors are notified. They are used to flush out enemy strongholds. They are used as booby traps, left to hibernate for decades, they can spring to life again within a thirty seconds.

They are referred to as robots by most official documentation and in the broadest sense this is an accurate label but they are not the traditional robot like the Kerdi. They have also been described as constructs, giving a sense of their artificial nature. They are constructed out of trillions of molecular machines, in some cases like biological mechanisms in living cells, in other cases they are unlike biological molecules. The Lesser Seed do not eat drink or breathe, they power themselves off of what has been likened to an egg yolk. A chemical liquid that their molecular machines use to power themselves and as raw material to repair damage. As the Lesser Seed use this yolk, they grow thinner until they seem emaciated and gaunt. A captured Lesser Seed, if kept from hibernating will keep operating for three months. If they are undisturbed they will go into hibernation within three days and can stay in a state of suspended animation reportedly for up to thirty years.

The Lesser Seed can regenerate even severe damage. A foam is produced by glands in the skin and seals up even large wounds. Molecules in the foam link up and form a scaffold for tissue to rebuild inside of. A key to their durability is their simplicity. With no internal organs and a short expected life span, they are able to quickly use up their yolk to stay functioning and restore lost tissue in seconds.

Lesser seed are commanded by Chezbah Warriors but interestingly it seems like it is the Lesser Seed that seems to access the Warriors mind to know what he wants and to tell him of danger.

The name “Lesser Seed” comes from the Chezbah reference to the Priests and the Warriors as the “Greater Seed” although they are seldom called that directly. Those that are Scourged are also referred to by the Chezbah as Lesser Seed. There is a belief among the Chezbah that one day “the Lesser will become the Greater” when referring to difficult times. This seems to involve the Lesser Seed saving the Chezbah way of life but the details are unclear even among many Chezbah citizens.