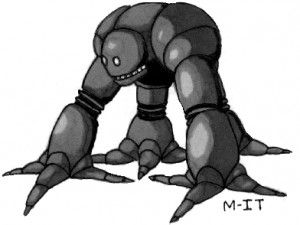 With all this thinking about GMing I’ve done, the crazy idea popped into my head that with the Session Sheet, I could set up a system to make a game GMless (or GM-ful if you insist, but please don’t). The interesting thing is, that with a few tweaks, this could be a universal GM ditching tool*. I haven’t tried this yet but if my players don’t lynch me for suggesting it, I’d like to have it go something like this.

All players roll for either IQ or Intuition, player’s choice. For each fraction column passed (or fractional success) the player gets to define one of the boxes for the Feel, Goal, reward or any of the first challenge boxes. The player with the best roll (rolls the lowest fraction column) goes first. In the case of a fraction column tie, do a quick roll off with a d10 (thats an ugly solution but simple) low roll wins.

For players that passed their roll they have to choose a descriptor and then use it when filling out the box. The descriptors are open ended concepts just to get the players started on what they will fill in the box.

Players must work with what has already been written, do not try to purposefully contradict an element or make nonsense entries to sabotage the setting.

Once the player has filled in that box, they are responsible for that element while the game is being played. Any time that element comes up, they are in charge of it. They may inject the influence of that element when appropriate in play. Put the players initials in the boxes they define.

If boxes are left unused once all the players that passed their rolls have defined their boxes or if no one passed their rolls, have a roll off (d10 low roll wins) to see who goes next. Each player fills in one box, this time the descriptors they get to choose from are.

Again, if a player fills in one of these boxes, they put their initials in the box and are responsible for that element of play.

If all the elements for this stage of the game are defined and players have not had a chance to give any input, the remaining players may each add to one element. If they passed their roll, they use the first list of descriptors, if they failed their roll use the second. Each player gets some say in the session. Twisting an element from it’s original intent is fair play but modifications cannot contradict what has already been described. The player that originally defined the element keeps control of that element. If extra paper is needed, it can be used but keep things short.

So that’s the plan, now I need to playtest it and see how bad a train wreck I’ve just put together.

*I have nothing against GMs, I play one on TV.

2 Responses to Ditch The GM