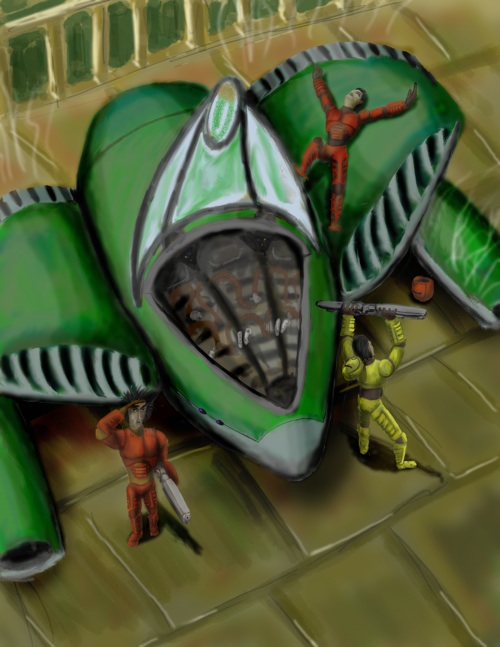 Assigned Objective: Tactics and cultural observation of a Scimrahn raid

Progress Report: The raid went well but the tribes involved did sustain relatively heavy losses. I’m assured that this is to be expected. The Scimrahn seem unconcerned about the situation.

Video and sensor telemetry documentation of the raid will be delivered via teleporter.

On January 3rd approximately 18:00, a gathering of four raider tribe enforcers was co-ordinated by local Scimrahn scouts. There was indications that a Kelrath plantation was getting ready to deliver a huge amount of food to a city deep underground. There was no anticipated escort as this was only a food transport and it was being loaded outside of any normal Scimrahn activity.

The raid was risky. It would take four tribes working together to have enough force to overwhelm the freighter. It was so far away that the Deltas would not have the fuel to return home which is probably why the Kelrath did not expect Scimrahn involvement.

The raid commenced on January 18th at 12:56 with 120 Deltas and four Assault Transports. Only four E-suits in the tribes were fast enough to keep up with the Assault Transport and take part in the raid.

Almost immediately the deck lasers of the Kelrath Freighter and the Rall4’s on the freighter caused the loss of a third of the available Deltas in their first pass. Only two of the Rall4s remained after the first attack.

The Assault Transports moved in and targeted the freighter’s bridge and engines. At first this tactic did not seem to have much effect. It is an attempt to disable the vessel with less damage to the vessel and it’s cargo.

On the Delta’s second pass, some of the Freighter’s deck lasers were now tracking the Assault Transports, reducing the losses significantly. Only eighteen of the Deltas were downed and the rear shields of the freighter were down. The pass destroyed the remaining Ralls and one of the pilots was able to take out the control bridge.

The Assault Transports dropped their troops and deltas dropped men on the deck which put more than two hundred and fifty armed men against the freighter’s one hundred and thirty.

Several Delta’s landed on the captured freighter at a time and refueled from the vessel’s immense fuel supply and the tribe engineers got to work rigging a control system for the freighter.

Negotiations with the Kaloord tha owned the vessel will begin tomorrow via a free trader because none of the tribes have ever dealt with this Kelrath before. They will negotiate the return of the freighter in return for a pact of non-hostility. There’s nothing to guarantee the Kelrath will follow the pact but some Kelrath actually agree to it.

If not accepted, the freighter may be used to attack a Chezbah target.

The food taken in the raid is an enormous supply. The matriarchs say that it will be more than enough to resupply the loss of equipment and manpower the tribes lost.